This Churro Cake is moist cinnamon vanilla cake, sprinkled with buttery cinnamon sugar between the layers, and topped with a creamy sweet cinnamon frosting.

Have you ever bitten into a fresh and sweet churro and thought it was pure heaven in a small bite?  I remember the first time that I had a churro, I just knew that it was a dessert for me.  I wanted to bring my favorite flavor of this Mexican crunchy dessert into a cake.

Lately I’ve been wanting to turn all of my favorite flavors into sweet desserts.   I think it’s so fun to come up with different twists on these desserts and this one I really took up a notch by adding the layer of cinnamon crunch topping between the cake layers.  Not to mention the creamy cinnamon frosting.  I really outdone myself with this cake.  Your entire family will love it.

What is a Churro Cake?

Churro Cake is three moist layers of vanilla and cinnamon cake.  For the cake I cheated a little and just two boxes of french vanilla cake mix that I doctored up some to add a punch of flavor to the cake mix.   In between the layers I sprinkled a buttery cinnamon sugar mixture to give the layers a little crunch plus a stronger cinnamon flavor.  I really think the cinnamon sugar crunch mixture is what really makes this cake.

Then, I topped the cake with a sweet and smooth cinnamon frosting.   I took that up a notch but added Churros on top for the decorations.  You can’t have a Churro Cake without adding some churros to the top of the cake, am I right?

Can I bake this cake in a different shape?

Yes, you can bake this Churro cake into different shapes.  If you want to make this a 9×13 cake you will need to remember that since you are using two boxes of cake mix that you will have extra batter left over.   You should have enough leftover batter to also make about 12 cupcakes.

Do not brush too much melted butter on this cake.  You do not want to drench the cake you are just looking to have something for your cinnamon sugar mixture to stick to,

Be sure to use room temperature butter for your frosting so that it mixes easier.  Trying to get cold butter to mix into a fluffy and creamy frosting is almost impossible. 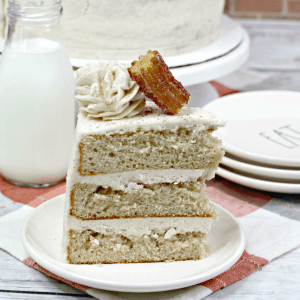 You can purchase caramel sauce near the coffee items or ice cream cones in your local grocery store.

Any cookies that may not be particularly necessary for the website to function and is used specifically to collect user personal data via analytics, ads, other embedded contents are termed as non-necessary cookies. It is mandatory to procure user consent prior to running these cookies on your website.